Browse: Home / Michelle Obama Wants You To Drink More Water, but why? On September 12, 2013 the first lady told America to drink more plain water. We should “Drink Up” plain water.  Michelle Obama stated that if you “drink just one more glass of water a day and you can make a real difference for your health, for your energy, and the way that you feel”.  She claimed that for her family, “the more water we drank, the better that we felt”.  All this in a campaign named “Drink Up’.

On NBC’s “The Today Show” she stated “Water is the best and easiest choice we can make to feel energized, focused, healthy and refreshed. You are what you drink, and when you drink water, you’re at your best. So drink up.”

Some critics have already pointed out that the first lady could have said that water was a better choice than soda, it would have been the perfect opportunity. Instead, she opted to push plain water as some type of energy drink that will improve focus. Is there any truth to her statements? No! The average American does not need “an extra” glass of water every day if they are hydrated. Many of us have been told for years we should drink 8 glasses of water a day. For many people that alone is overkill. 9 glasses wont make you feel any better than 8. And most of us don’t even need 8. There is no real magic number to how many glasses of water you have a day. “Enough” is how many you need to remain hydrated. This will of course be much different for someone running a marathon vs. someone working in an air conditioned office.

The question remains however, as to WHY Mrs. Obama wants you to drink more water. Is this something that she believes in firmly, and just doesn’t know any better? Doesn’t she have advisers for these type of things before she speaks publicly? Or is there another agenda.

People in this country, at least the majority of them, usually believe what they are told. They couldn’t say it on TV if it weren’t true, right? I think we all know better than that. If you aren’t sure of a reason in politics, follow the money. Mrs. Obama did not mention water as being a better alternative than soda. Soda companies, in addition to selling soda, have been capitalizing on the much more lucrative bottled water craze.

As for tap water, drinking too much could actually do more harm than good. Most municipal water supplies have Fluoride added. This represents between 66% and 75% of the US populations tap water. Fluoride was added to water supplies back in the 1940s to help poor children from getting cavities. It is added to the water at around 1 part per million. But make no mistake, this is a toxic chemical! Studies have shown a number of negative health issues, including thyroid disorder, softening of bones causing easy fractures, and most concerning, impaired brain development and function. It can basically dumb you down, according to opponents of fluoridation. There are many who would say that is the reason that the white house wants us drinking more water. 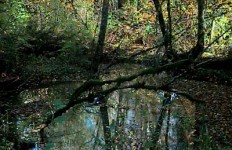 How To Find and Purify Water in The Wild→